13 Minutes to the Moon 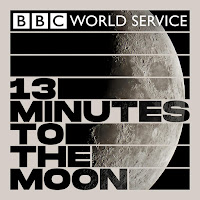 You are probably aware that we recently celebrated the 50th Anniversary of man landing on the moon since there was a lot of news coverage about this historic event.  I have always been interested in space exploration.  I think growing up in Florida in the late 50s and early 60s is where my interest began.  I can remember seeing the rockets they were testing in the sky.  It made a big impression on me.

I believe that we all take space travel for granted now.  The trips to the moon followed by the Shuttle missions, the International Space Station, and the privatization of space travel such as SpaceX have made these feats common place.  These launches used to be major national events that were covered by all of the news organizations.  Now we don't even realize when rockets are sent into space.

I wholeheartedly recommend that you listen to the podcast 13 Minutes to the Moon by the BBC.  It's a fascinating analysis of the final minutes before landing.  It clearly articulates how precarious this mission was and interviews people who were involved.  By examining the last 13 minutes, the planning involved to get to that point, and the decision-making that occurred each step of the way, the listener is transported to that time when space technology was still in its infancy. It's amazing to realize how far we have come since that time.

Have you found your tech joy today?