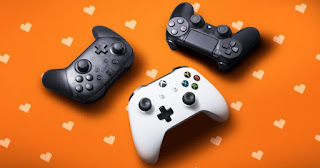 This will be a short post, but I am tired of politicians using video games as a scapegoat for not dealing with the crisis of domestic terrorism.  I don't want to get too political, but blaming video games for violence after tragedies such as occurred in Texas and Ohio is just wrong.  If you have done any research, you will find reputable studies and reports that will tell you the same thing.

There are multiple sources that show that video games do not cause violence.  The American Psychological Association issued a policy statement from their media psychology division where they found that "scant evidence has emerged that makes any causal or correlational connection between playing violent video games and actually committing violent activities."  In fact, Dr. Chris Ferguson, a Stetson University psychology professor who led the committee issuing the policy statement said, "The data on bananas causing suicide is about as conclusive.  Literally.  The numbers work out about the same."  In addition, the Supreme Court heard a case about a California law that banned selling violent video games to children.  They found that there was no research to support the idea that video games were to blame for violence.

My sons, now adults, have played video games most of their lives.  I've seen for myself the impact these games have on them so I am not surprised by the evidence that negates this "causal connection".  Anyone familiar with video gaming knows how prevalent it is in Japan and South Korea.  Those countries have some of the lowest rates of violent crime.  It is just ridiculous to blame video gaming for the acts of domestic terrorism we are experiencing in our country.

I see on Twitter that #VideogamesAreNotToBlame is trending nationally.  I'm happy to see the pushback against making video games scapegoats.  They are not the problem!  If you haven't read the tweets, you may want to do so.  They're interesting and compelling reading.

Have you found your tech joy today?
#Blaugust2019
Posted by TechJoy2Day at 8:58 PM